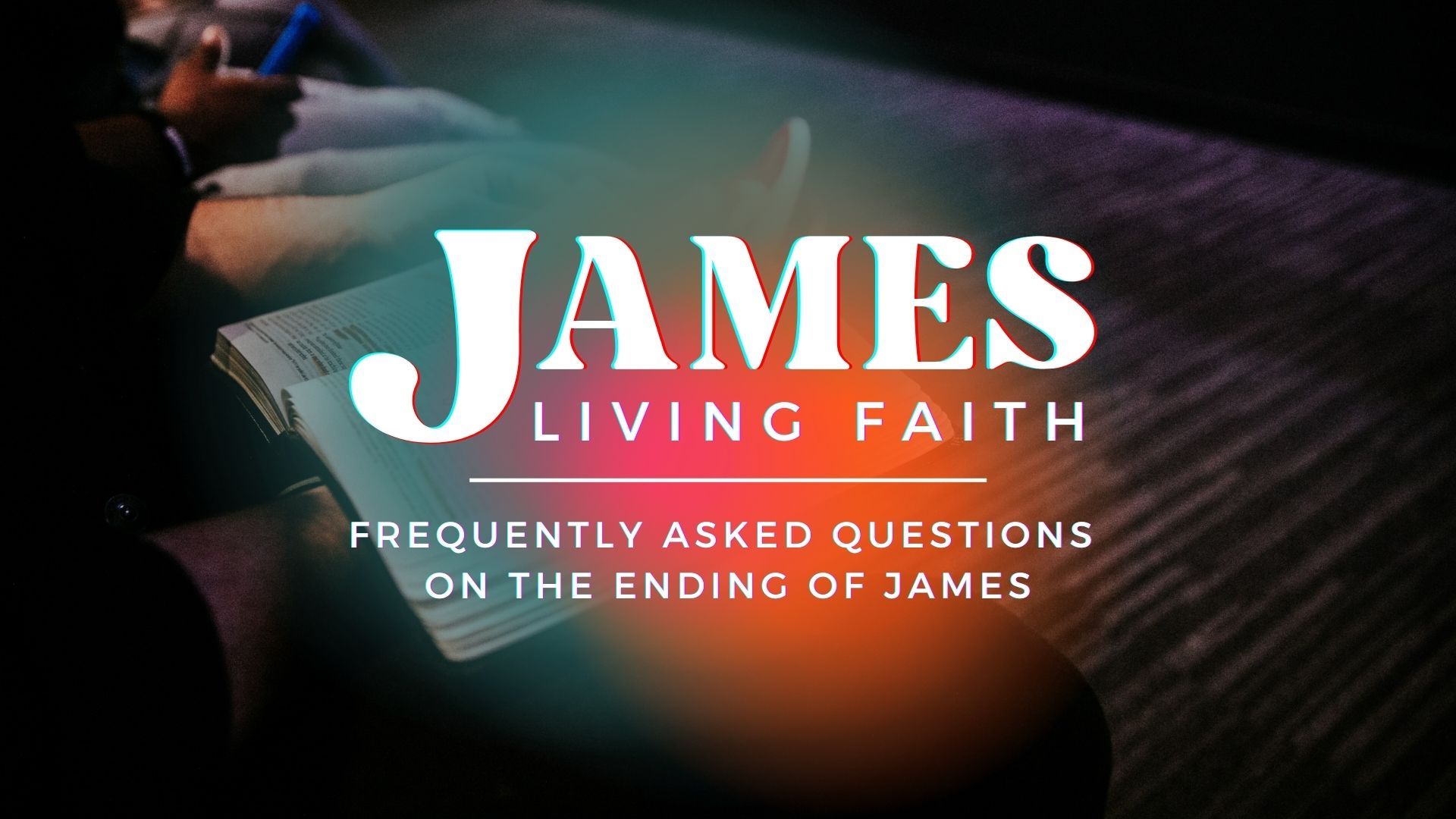 31 Jul Frequently Asked Questions on the Ending of James

Posted at 11:00h in General by Will Jackson
Share

The book of James is relatively straightforward.

James, for the most part, builds upon some of the more logic-oriented parts of the New Testament by providing a “Guide for Life” template for his readers to follow.

However, the letter is not without its own challenging interpretive moments.

The most prominent of these is his formula for salvation in 2:14-26. Whereas the apostle Paul, in Romans for example, emphasizes the priority of faith in the salvation of a Christian, James highlights the necessity of works. At first glance, this reading is difficult to comprehend. Yet, when reading the book of James more comprehensively, and in light of the rest of the New Testament, one can see that James is striving to correct a misunderstanding in his readers that faith can somehow exist apart from works (Google this word: “antinomianism”). In other words, if someone claims to have faith but has no works, then their confession of faith is either sadly misunderstood or deceptively offered. The works prove their faith

Another notable speed bump in the epistle is the ending. The letter ends rather abruptly, with no salutation or benediction, but instead offers a series of exhortations to catalyze the churches in view. In James 5:13-20, the half-brother of Jesus delivers a handful of peculiar lines which, for the modern reader, may leave us scratching our heads.

In what follows, I’m hoping to provide a brief “explainer” to the ending of James by outlining five frequently asked questions (FAQs).

FAQ #1: Does James mean that all prayers will be answered?

When reading the epistle, Verse 16, in particular, “confess your sins to one another and pray for one another, that you may be healed” could give the impression that prayer has a 1:1 correlation with healing—in other words, prayer is always answered.

Coupled with a few other verses, readers whose prayers are not being answered may wonder if it is because they do not have a strong enough faith, or no faith at all, or perhaps they aren’t righteous enough.

There are two rules for reading the Bible which are helpful to us here.

First, we have to remember how James is written.

James, though it is an epistle where we might expect straight-laced indicatives and imperatives—truths and commands, often borrows the style of the Proverbs of the Old Testament and the Parables of Jesus. Therefore, James can be considered wisdom literature of the New Testament—in other words, it is a guide and not a formula.

Second, we have to remember how the rest of the Bible acts to clarify James.

Other places in Scripture inform God’s teaching on prayer. Paul, who experienced some kind of ailment that he called “the thorn in his flesh” pleaded with God to remove it, but God chose not to do so. This is Paul: 9 But he said to me, “My grace is sufficient for you, for my power is made perfect in weakness.” Therefore I will boast all the more gladly of my weaknesses, so that the power of Christ may rest upon me. 10 For the sake of Christ, then, I am content with weaknesses, insults, hardships, persecutions, and calamities. For when I am weak, then I am strong. (2 Corinthians 12:9-10)

We aren’t told why God doesn’t respond directly to some prayers, but in light of his sovereignty, the general heartbeat of the Bible suggests that Christians should pray with humble expectation rather than a demanding entitlement. God does love us and is working on our behalf, but also, His ways are above our ways.

Though some Christian traditions would support the idea that elders are closer to God or have more access to God more directly, this isn’t supported in the New Testament. Instead, elders are regular faithful Christians that have been given particular gifts and an assignment for spiritual leadership within the local church. According to what we see in Acts 6 (where elders were to devote their time to the ministry of the Word and prayer), the responsibility to pray has more impulse here in James 5 than any notions of spiritual superiority.

Verse 16 demonstrates that prayers for healing (alongside confession of sin) can be done by anyone in the congregation.

Therefore, this passage concisely reminds us, in the life of the church, intercessory prayer can be offered by anyone, but it is a responsibility of the elders when called by fellow church members.

Option 1: Is the oil medicinal?

There is some credence to this notion in Luke 10:34 where oil and wine were used by the Good Samaritan to dress the robbed man’s wounds—like ancient hydrogen peroxide or Epson salt.

But this theory begs the question, “Why were only the elders allowed to administer here in James’ exhortation?” If the oil were medicinal, then surely the local physicians, or even the grandmamas of the church, would carry out this “deaconly” function.

Option 2: Is the oil mystical?

There is no basis for the oil itself holding any spiritual properties making it able to heal (either before or after the elders have utilized it).

The word “anoint” throughout the Scriptures is used to describe a moment of consecration—a ceremony (most often for kings, prophets, and priests). In these moments, the Spirit of the Lord is what transforms or changes the recipient of the anointing—not the oil.

The only other place healing by oil shows up in the New Testament is in Mark 6:13, where the apostles are healing the sick alongside the act of anointment.

Option 3: The oil, most likely, is symbolic.

Similar to how Jesus prescribed bread and wine as the physical elements to represent and commemorate the sacrifice of his body and blood, so too, is the oil intended to symbolize—alongside heartfelt petition—a spiritual dynamic also at play, but one that is not dependent on the oil itself (other healings in the New Testament takes place without oil).

The oil provides a physical gesture of the prayer and the prayer provides a vehicle through which God, the supreme, may choose to act.

If anything, the oil is a help to those praying—providing a tangible “hand-hold” to an otherwise invisible exercise … a way to help focus our authenticity and fervor in the prayer, to ask that God would give special attention and care to this situation, and, ultimately, to help us trust in God to do His will.

The term “faith healing” has come to more prominence in the past century and is now, perhaps, most associated with the prosperity gospel—a deceitful scheme masquerading as Christianity. Notable “faith healers” of which you may have heard are Kenneth Copeland and Benny Hinn—who host “healing events” around the world. These are nothing short of demonic and, therefore, no, James is not referencing “faith healing.”

Ok, then. Is James referencing “the gift of healing?”

Notice, the group of elders were called to pray. If one were to take 1 Corinthians 12 at face value, then it’s possible some of the elders in James’ mind had the gift of healing, but unlikely that all would have had such a gift. Therefore, the healing described has less likely to do with the “gift of healing.”

Douglas Moo, a New Testament scholar, says it this way: “this faith, while certainly including the notion of confidence in God’s ability to answer, also involves absolute confidence in the perfection of God’s will. A true prayer of faith, then, always includes within it a tacit acknowledgement of God’s sovereignty in all matters … and as we know, it is not always God’s Will to heal.”

What about this: Does the gift of healing still exist today?

Maybe. Because we worship a God who acts with the utmost power and freedom, we have to understand all the first century gifts as possible, but because we so rarely see appropriate expression of them in our Christian context, it is safe to not expect them.

No. Simply look to Paul prescription of wine for the upset stomach (1 Timothy) or his celebration of Luke the physician (Colossians). God often acts within the realm we understand as science—He invented it. But we must remember, He is not limited by it. He can act and do whatever He wants to do—by whatever means.

With all of that being said, there is no indication that God would have us seek these physical means of healing while neglecting His invitation to address our ailments supernaturally.

James isn’t saying that all sickness is caused by sin, but he is allowing for some sickness to be the consequence of sin. An example of this may be found in 1 Corinthians 11:27-30 where some had fallen ill—and even died—as a result of taking the Lord’s Supper “in an unworthy manner.”

This point helps us to remember the close connection between the spiritual and physical in our personhood. When Jesus, as a human, was spiritually distraught the night before his crucifixion, he sweat drops of blood. His body showed a physical response to a spiritual stress—not because of his sin, but because of the looming prospect of the world’s sin for which he would soon atone.

Note, this is distinct from an instance in which a psychological burden (e.g. anxiety, depression, etc.) may lead to a physical illness. Though this does sometimes occur, an anti-supernaturalist will suggest this is always only what is happening. Rather, we should be open to understanding both psychological AND physical ailments as the possible results of sin—perhaps given as a wake-up call to repentance.

Does this mean that most of the time when I get a cold that I have unaddressed sin in my life? Maybe. It’s also possible that the weather shifted, and my body wasn’t ready. Each of us must do that self-assessment work that is prescribed in the Christian life. It would seem, at minimum, that sickness—in this way—may be given as a speed bump intended to slow the Christian down for potential sanctification.

To dive deeper into our church’s recent study in the book of James, visit our Media page at crosspointclemson.org/media. 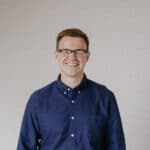 Will Jackson is the Executive Pastor at Crosspoint and is passionate about seeing Christians equipped to go on mission. Outside of work, Will enjoys spending time with his wife, Kimberly, and their children, Miles and Emma.