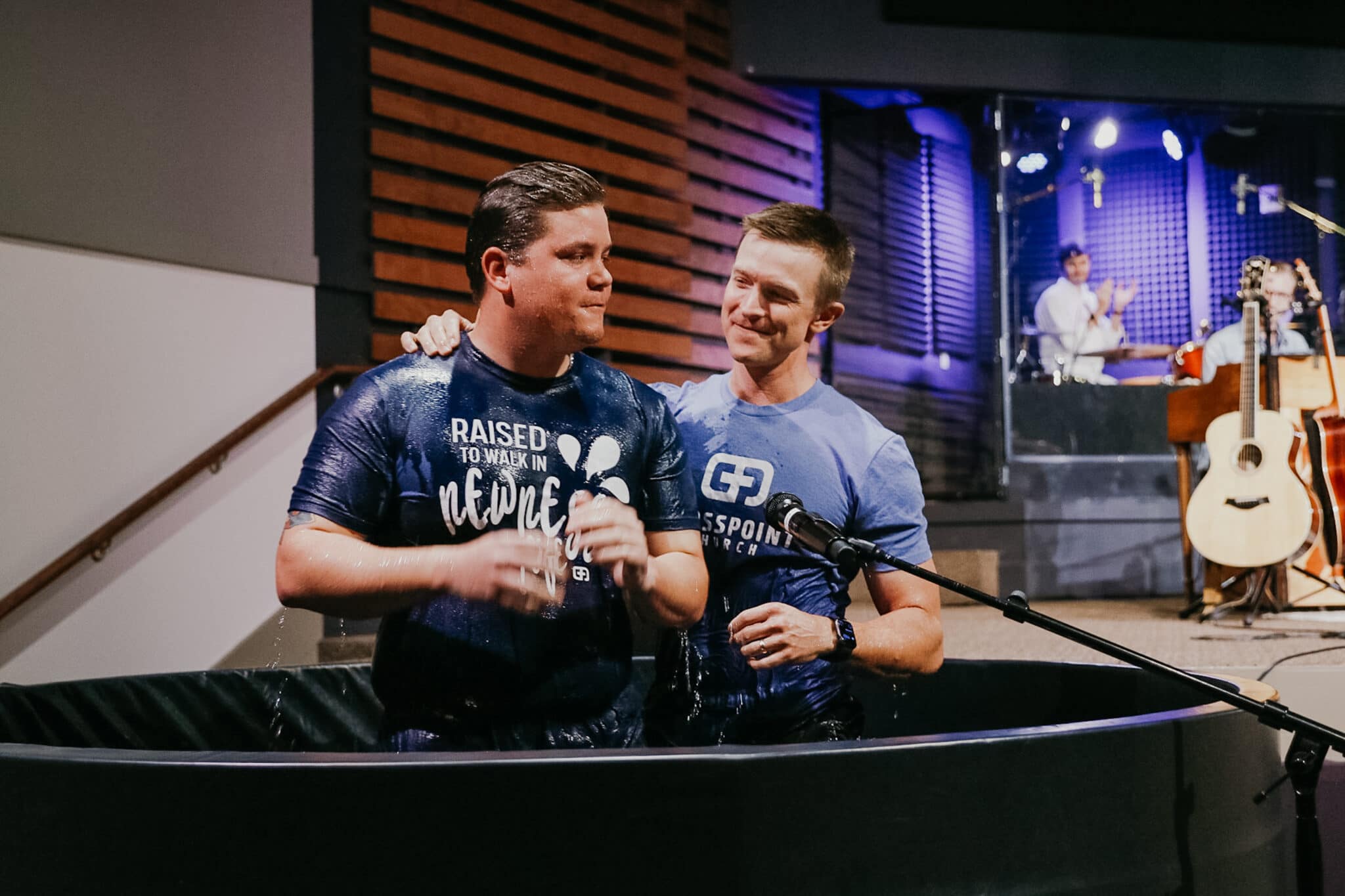 Posted at 08:05h in General by Tim Dietrich
Share

As humans, we love to have control over the things that we do. We feel the need to have a plan.  Crosspoint covenant member, Jamie Paradeses, has always been an ambitious person.  But before being transformed by Christ, his ambition was more often bent toward personal gain.  Only when Jamie realized that by surrendering control, waiting and trusting in God’s plan, would he know where God wants him to go.

Born in Lexington, SC, and growing up on a swine farm, Jamie was the youngest of three brothers. His biological mother was addicted to drugs and alcohol; he last saw her when he was five years old.  His father did his best to support his children despite those struggles they faced together. It wasn’t easy for the boys while living under one roof with their father, stepmother, two younger sisters and grandmother while working on a farm.

“I know that my dad is a Christian and very comfortable in his faith, but I didn’t grow up in a Christian environment.  I remember visiting a friend’s church when I was in the 7th grade, but all I remember is that the pants I wore were too tight,” Jamie recalls.

The brothers were very good at sports, and very competitive by nature.  However, the importance of maintaining a family-operated farm and taking care of their grandmother put a strain on their participation in athletics.  There was always work to be done on the farm.  So, they had to drop out of sports by their sophomore year in high school to meet their demands at home.  At that point, Jamie felt his plans to succeed in sports were crushed and he knew that he was ready to leave home by the time he graduated.

“My older brother joined the Marine Corps.  That made quite an impression on me,” Jamie says.  “He joined and was no longer under the umbrella of our family.  We’re very competitive, so I wanted to join, too.  I wanted to have that same independence.”

Jamie soon found that being a United States Marine was something else he was good at. “Going into boot camp, I had the attitude that I wasn’t going to fail.  Failure was never an option for me,” he says.  “It’s a transformation, an individual process.  I went to boot camp for 13 weeks, and I came out a different person.  My motivations switched.  My purposes switched.” 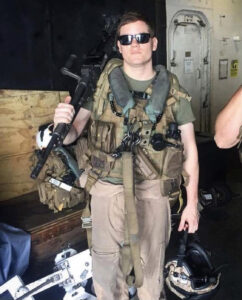 “’The entire time, I knew why I was there and I knew I was where I should be,’ he says.  ‘I knew there was a plan for me, but I always believed that I was in control of that plan.’”

Interestingly, his second visit to a church occurred during boot camp, but it wasn’t to worship the Lord.  “I went to church because it was about the only time I wasn’t being yelled at,” he admits.

Based out of the Marine Corps Air Station New River in Jacksonville, NC, Jamie served for nine years, including crisis response, humanitarian, and security deployments to Spain, Italy, and Libya.  “The entire time, I knew why I was there and I knew I was where I should be,” he says.  “I knew there was a plan for me, but I always believed that I was in control of that plan.”

Jamie and his wife, Kelly, dated during high school and were married in 2015, his fifth year in the Marines.  He attended church services with Kelly throughout their marriage.  “I didn’t necessarily want to go to church at the time,” he admits. “I didn’t feel the need to go for a spiritual reason.  I had always wanted to do things my way and I thought that I could handle anything that life threw at me.  Kelly and her parents provided a Christian example in my life that was lacking in me.  Being with her family was a blessing.” Before he knew it, Jamie’s plan was about to change: “I found out that Kelly was pregnant two days before my second deployment, and later I blew out my knee.  I knew then that I was going to leave the Marine Corps.  I had no idea what I was going to do when I got out.  I had a lot of doubts about the future, but now I realize that God was working his plan for me then.”

Attending Clemson University was always a dream for Jamie.  His grandfather was in the Navy and went to Clemson.  Jamie was very close to him, so it was always on his mind to go there someday, but he never really thought it would happen.  One day, Kelly suggested that they go ahead and buy a house in the Clemson area, move the family there, and Jamie would plan to leave the Marines to pursue his dream of attending Clemson.  “Kelly has always been there for me, especially when I had the attitude of never feeling that I needed anything more than myself to live life,” Jamie says.

A turning point in Jamie’s spiritual journey came in December, 2020, when Kelly’s father passed away.  Jamie was very close to him.  “When alone with Kelly’s mom, she asked me directly if I believed in Jesus.  I answered ‘I believe he’s real.’  Then she asked ‘Do you know of him or do you know him?’  I said that I knew of him.  She then said, in her special way, ‘You need to fix that.’  That special moment with her kind of got the wheels turning.”

Another turning point was when Jamie met Crosspoint Church’s worship minister, Ronnie Morris.  Their sons played on the same soccer and T-Ball teams.  The two families quickly connected.  A few weeks later, Jamie, Kelly and sons, Deacon and Gaines, visited Crosspoint.  Following the service, Jamie told Ronnie that he felt as if the preacher that day had been speaking directly to him.  The family returned the very next Sunday.

“I don’t believe that Jamie had ever let his guard down in church, but something connected,” Kelly remembers.  “I saw him talking with Ronnie and Josh Davis.  I was thinking ‘This is it!’  I didn’t want to say anything, or be a distraction.   I could see that Jamie was emotional.”

The two men knew that the Lord was working at that moment.  They shared the gospel and their personal testimonies with Jamie, and prayed together.  It was then that Jamie confessed his sinfulness before God, his belief in Jesus as risen Lord and Savior, and asked God to forgive him for his sins and to save him.

“It was a glorious moment!” Ronnie says.  “Jamie was instantly and visibly changed. He even said ‘It feels like a big weight has been lifted off of my chest.’  He was ‘all in’ immediately and wanted to know what he needed to do to start walking with Christ.  I gathered a few resources for him, including a Bible study called Just for Starters, and a book titled Spiritual Disciplines for the Christian Life, by Donald Whitney, and directed him to an ESV Study Bible to order online.”

“It was then that Jamie confessed his sinfulness before God, his belief in Jesus as risen Lord and Savior, and asked God to forgive him for his sins and to save him.”

Kelly had taken the kids to their truck, and a few minutes later, Jamie and Ronnie came outside.  “Jamie hugged me and said ‘I got saved today,’” she says.  “All I could say was ‘I know, I know!’  It was so special.  And, after that day, he has been like a totally different person.  Even on the ride home, he was saying things and asking me questions that were so unlike him.  Jamie had always put a lot of pressure on himself to be the best and work the hardest, but now I can tell that he feels God’s grace and that it gives him peace.”

In September, 2021, Jamie was baptized at Crosspoint Church, symbolizing his new life in Christ and proclaiming that he is now committed to Jesus.  “Ronnie baptized me,” Jamie says.  “It’s a one-time ordinance of the Lord Jesus, and your actions are representative of that.  You don’t do the one-time ordinance and then just go do what you want to do.  Baptism isn’t the checkered flag, it’s the green flag.”

Becoming a Christian gave Jamie a new purpose to his life: “I didn’t necessarily have to change the goals and ambitions that I set for myself and my family, but it gave me different times and reasons to achieve them,” he says.  “You achieve what God wants you to achieve by achieving what you believe is in your plan, even though your plan is already determined.   When you realize that’s what He is calling you to do, you put 100 percent into it.”

“Becoming a Christian gave Jamie a new purpose to his life: ‘I didn’t necessarily have to change the goals and ambitions that I set for myself and my family, but it gave me different times and reasons to achieve them,’ he says.”

Jamie’s dream at one point was to be a football coach or athletic director:  “I’m sort of off that path now because I thoroughly enjoy coaching my sons in their sports,” he says.  “If I pursued that dream, I would miss the opportunities to enjoy being with my kids.  So now, I’m working toward a Clemson degree in Business Management with a minor in Athletic Leadership.”

As Jamie continues his work at Clemson, his service on Crosspoint’s media team, and his family prepares for the addition of a new baby, his involvement in his small group has been of tremendous benefit to Jamie as he embraces the journey of sanctification through the light of the gospel.  “The guys in my small group also have a daily sharing of scripture that always presents the Bible in new ways, especially in ways to apply it to every different aspect of your life,” he says.  “I’m not much of a book reader.  That is just something that never really appealed to me, but getting into the Word with these guys has meant the world to me. I was also part of an introduction-to-the-Bible study group.  I never realized how much stuff there was to absorb.  You read and just want to keep reading.”

Jamie lists two Bible verses as among his favorites:

Galatians 2:20:  I have been crucified with Christ. It is no longer I who live, but Christ who lives in me. And the life I now live in the flesh I live by faith in the Son of God, who loved me and gave himself for me.

Jeremiah 29:11: For I know the plans I have for you, declares the Lord, plans for welfare and not for evil, to give you a future and a hope.

“In my case, these verses show that God has always had a plan, and it included my being here,” Jamie says.  “They relate to who I believe I am as a person.  I am still an ambitious person.  My ambitions are still the same, but now the reasons behind those ambitions are totally different.  The difference now is that I firmly believe my plan is set in stone, and that what I’m doing is the right thing to be doing, and that God is in charge.” 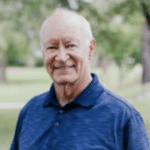 Roy Scott retired as Clemson University’s director of Public Service Marketing in 2010. He was the executive producer of the popular ETV Radio program, Your Day, and hosted on-air features about South Carolina arts and music. In addition, he executive-produced the public television nature series, Expeditions with Patrick McMillan, and the travel series, Your Day On the Road. Over the last two years, he has done some freelance writing, and his articles have appeared in The Southern Edge and okra magazines. Roy and his wife, Diane, have been members of Crosspoint Church since 2012.